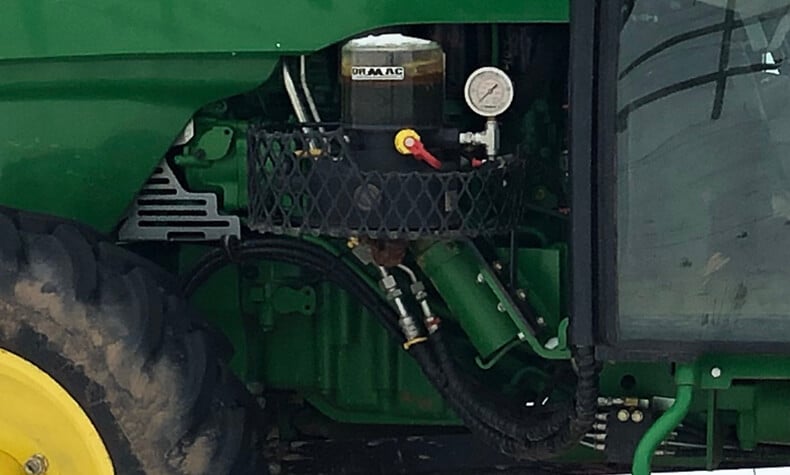 Published on May 8th 2019
By Carroll McCormick

Regularly greasing bearings, pins and bushings is part of the maintenance game. But what to do when the grease fittings are nearly impossible to reach, yet need a shot every few hours? The solution at Kings Produce in Kings County, Nova Scotia was to install automatic lubrication systems.

Kings Produce is a wholesale shipping company for six farms in Nova Scotia’s Annapolis Valley, among them Noggins Corner Farm. Noggins uses special orchard tractors with articulating front ends that require greasing every eight hours. Crawling under the tractors to grease the hard-to-reach fittings, not to mention keeping track of who greased what, and when, was a serious pain.

“To hand grease the front end is crazy. The grease fittings are in places where it is nearly impossible get your hands in,” says Kings Produce shop foreman Bill Cameron. And as for sticking to the lubrication schedule, he adds, “There is not one driver assigned to one tractor. Who is going to sit there and calculate eight hours?”

“We were starting to see wear on the new tractors,” says shop mechanic Kevin Kynock. This was bad news. Replacing the worn components is a big job that costs around C$5,000, Cameron notes.

After some discussion, they brought in Ormac Industrial Supplies, out of Sussex, New Brunswick, to spec an auto-lube system made by Lincoln Industrial. The result is that in 2018 Kings Produce installed systems in five tractors, and downtime for greasing those tricky front ends was eliminated.

On one of the orchard tractors, for example, the auto-lube system feeds seven grease points – front end hub axle bearings and pivot point pins and bushings – for two minutes every four hours. “That is while the tractor is moving, and that optimizes the greasing. There is no question they are getting a lot of grease,” Kynock says.

“Mobile equipment will have a recommended lubrication chart issued by the OEM, which will show the amount and frequency. This is the starting point for the system design,” says Ormac’s general manager Bob MacLean. The user can, however, adjust the greasing interval.

Thanks to Lincoln’s specially designed divider valve, every fitting gets the grease it is due. “The divider valve distributes the grease evenly through each feed line. It is not affected by downstream restrictions,” MacLean explains.

The system reservoir can be filled manually with an air grease gun, but Kynock and Cameron prefer the other option: easy-to-replace 11-ounce grease tubes. When farm hands see the grease level getting low in the transparent reservoirs, they slap in fresh tubes and get right back to work.