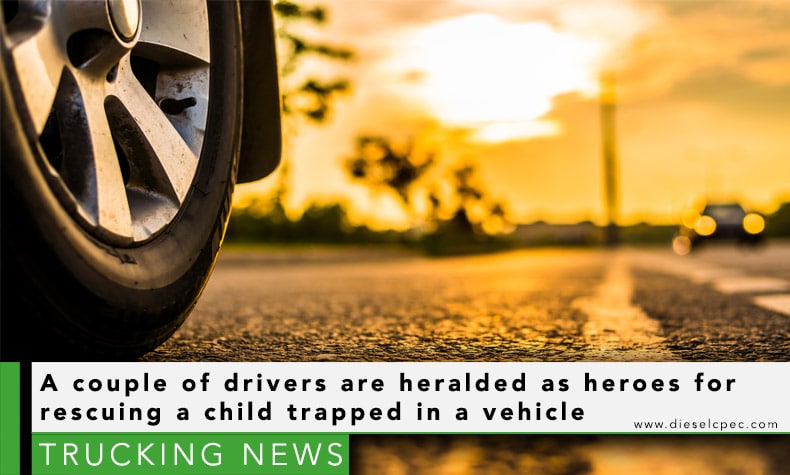 A pair of drivers employed by a Caseyville, Illinois-based company, Henderson Trucking, have been bestowed with the title of Highway Angels, courtesy of the Truckload Carriers Association (TCA). The men aided a young family who’s baby was trapped within their automobile.

Norwood, Missouri’s Kenneth Meekins, and Rio Rancho, New Mexico’s Cody Crisler, along with Henderson’s acquaintance, Jessica Graham, had a meal in Fairview Heights, Illinois together. While eating, they happened to see a couple and a small child desperately trying to open their pickup truck. The family had attempted unlock the door by prying the window open using an antenna ripped off the truck.

Since the three drivers had rode to the restaurant in Graham’s truck together, Meekins and Crisler rushed to Graham’s side box, picked up a couple of tools, and headed over to the family’s pickup.

According to Graham, the family informed the drivers about their daughter – who was about 3 or 4 years old – inadvertently locking the vehicle with the baby still inside of it.

Crisler squeezed the window open using a crowbar. Meekins assisted by holding open the newfound gap. From there, the father pushed the unlock mechanism on the door using the vehicle’s antenna.

TCA presented a certificate to Meekins and Crisler

In appreciation of their assistance, TCA presented a certificate to Meekins and Crisler for their life-saving actions. The drivers also were given a lapel pin, a patch, and even new truck decals. A certificate was issued to Henderson Trucking as well for recognizing their company representatives as Highway Angels. The TCA Highway Angel program is sponsored by EpicVue.