The biggest thing in racing 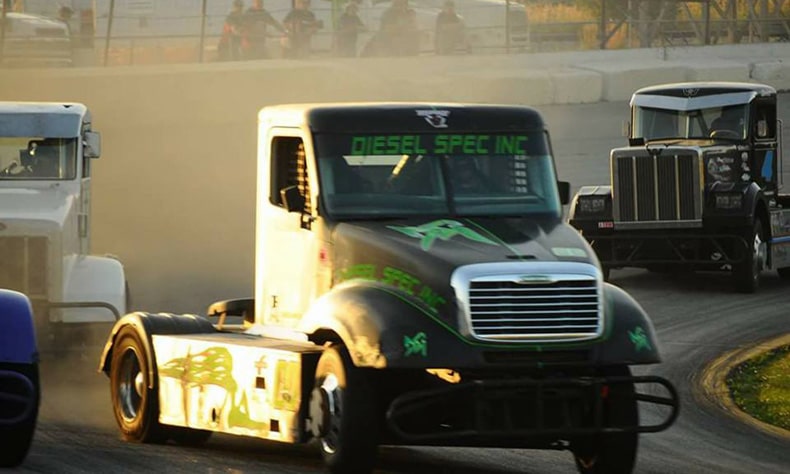 The rapidly expanding Bandit Big Rig Series entices trucking enthusiasts and the general public with nail-biting racing events, opportunities to talk with drivers and an informal show for working trucks.

The Bandit Big Rig Series is less than two years old, but it has become a renowned truck-racing showcase, with 13 events in 2018 and ever-growing crowds.

Eleven teams and 16 to 18 trucks now vie for points and cash prizes at the events, which are held at short tracks in the Southeast, East Coast and Midwest and include truck shows, trucking-industry vendors and chances for fans to interact with drivers.

“It’s exciting to be on the ground floor right now,” says Jason Johnson, general manager of the Bandit Big Rig Series. “We want to keep adding elements to this.”

The Bandit Big Rig Series has its origins in a road-course series launched in 2015. Those events didn’t draw large crowds because they’re difficult to watch logistically and semi-trucks have to slow down significantly to navigate hairpin turns, Johnson says. “It’s not a type of racing that’s exciting,” Johnson says. “North American fans like short-track, oval racing.”

After the road-course series ended, a short-track operator in South Carolina asked drivers who had participated in it to race there on Saturday nights. “It was just a huge hit,” Johnson says. “We were racing for beer money and just having a blast.”

Nearing the end of 2016, “it looked like there could be something there,” Johnson says, and that’s when the Bandit Big Rig Series, owned by Minimizer chief executive Craig Kruckeberg, was founded. During the inaugural 2017 year, the series held events at short tracks within a 500-mile radius of Louisville, Kentucky, usually as a semi-truck division of car races.

The Bandit Big Rig Series liberated itself in 2018. “We were drawing huge crowds in 2017, and we knew we had a really cool product,” Johnson says. “We wanted to make it a trucking event – something that’s fun and exciting and brings recognition to truck driving.”

Several thousand people have attended each race in 2018, Johnson says, and the crowd has grown with every event. “The bigger the crowd, the faster the trucks go,” he says. “It’s always fun to be in front of thousands of people cheering.” 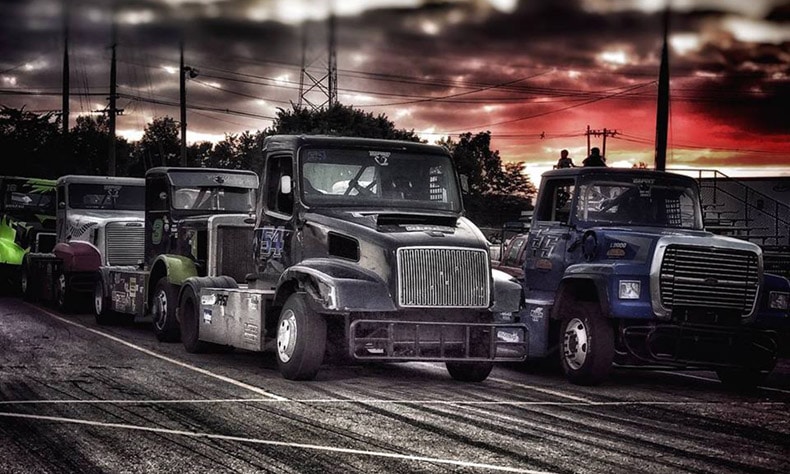 Most drivers in the Bandit Big Rig Series drive tractor-trailers for a living, Johnson says. Many are owner-operators, one owns a fleet that hauls coal and one team owns a motorcycle transport company, he adds.

Teams and individuals own their race trucks and build them to Bandit specifications and rules, which can be found at BanditSeries.com, under the Events tab. “We try to keep trucks stock outside of modifications for safety,” Johnson says.

“A big testament to these drivers is that they can wheel a truck like you wouldn’t believe, especially when you stack that many trucks on those kind of turns,” he continues. “They’re reaching average lap speeds of over 80 mph, and on the stretches they can get up to over 100 mph. They’re definitely great drivers, and we give the fans a lot of good racing action.”

“We like to say ‘we’re the biggest thing in racing,’ because we literally kind of are,” he says.

While the target demographic for semi-truck racing is males ages 18-55, Johnson says turnout is typically split 50/50 between males and females, and a lot of children attend as well. Kids ages 8 and under don’t need a ticket.

Many people who attend races are connected to the trucking industry in some way; they’re truck drivers, fleet owners, diesel technicians, mechanics, truck-parts store owners, etc., Johnson says. But many are just everyday people who want to see what a big semi can do on a short track, he adds. “I think a lot of people want to come out just to see what’s going to happen,” he says.

Tracks the Bandit Big Rig Series uses are generally 3/8-mile to 5/8-mile, and they have different shapes and banking degrees. With larger tracks, trucks can go faster, and with shorter ones there’s more side-by-side racing, Johnson says.

Each event is a day-long affair that includes a truck show in the morning, vendor booths, a practice session, driver meet and greet, several races, an awards ceremony and fireworks (see the sidebar for a general schedule).

Three heat races are 10 laps each. Then the Bandit Shootout is a one-lap race that pits two trucks against one another. The winner stays on to compete with the next challenger until a final winner is left. Two challenge races, which split the field (for example, nine trucks in each race if there are 18 total trucks) consist of 15 laps each. The finale is a 30-lap race with all the contestants.

The Fan Series Truck Show is not judged, and it’s an informal way for truck owners to display their rigs. “We love to see guys who drive trucks each and every day, and we give them that element where they can come out and show their rigs off,” Johnson says. “You don’t need to have a million-dollar show truck. We just like to see every form of truck, from old to new, from cool-looking to everyday truck that transports goods all across this country.”

The truck show also makes attending events easier for working drivers since it provides space for truck parking at venues that usually don’t offer that.

Registering for the truck show involves making a donation to the Wyakin Foundation, which prepares wounded veterans for post-military careers.

The truck show is free to the public, and toddlers to senior citizens attend, often asking questions. “It’s a great way for truckers to give back and hopefully gives them a fun opportunity to be proud of what they drive,” Johnson says.

In turn, driver attendees have a chance later in the day to view race trucks up close, meet race drivers and ask them questions about their rigs. “All the fans can come down and ask these guys questions: what they do for a living and how fast the trucks go,” Johnson says. “Everybody wants to know how big a motor they have and how many gears they have, what types of transmissions they run.

“All these Bandit guys love to sign autographs, and a lot of them let the kids sign their trucks. We get the next generation of enthusiasts involved in heavy-duty trucking.” 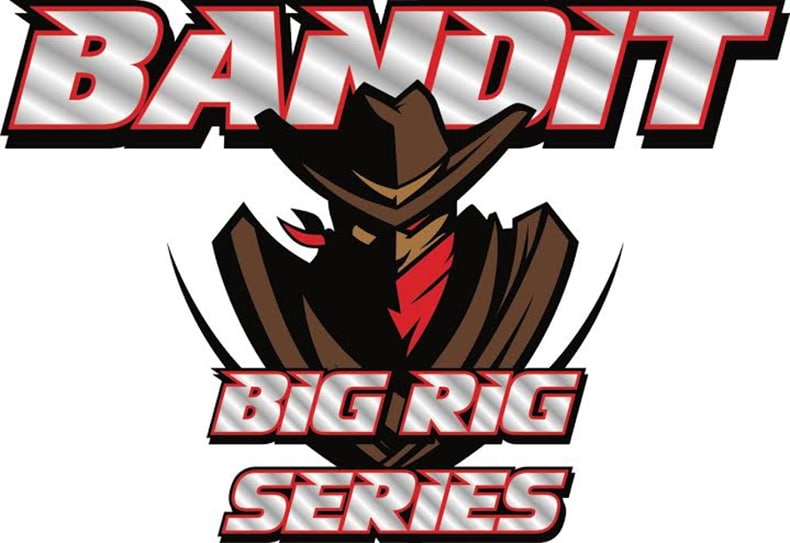 “I reached out to Diesel Spec to see what we could do together because they’re huge in the trucking industry,” Johnson says. “They have a tremendous following and they make a great ECM-tuning product. I go to a lot of truck shows and I’ve heard a lot of good things about Diesel Spec and its product. It’s great to have them as a partner – to have a name like Diesel Spec with us.”

In early 2017, Diesel Spec tuned Kikelhan’s 2002 Freightliner Columbia, which is equipped with a 1270 Detroit Diesel engine and a 10-speed transmission, is painted Diesel Spec colors and sports the DSI logo “The truck is well put to together,” Kikelhan says. “There are no perks to it. You can just get in it and be competitive with it all the time. Right out of the box, we won the first race with the truck.”

Kikelhan also races the truck at a track in Colorado and in local drag races. He drove it in a competition on “Shifting Gears with Aaron Kaufman” in August.

Diesel Spec offers two types of ECM tuning, which is the process of fine tuning the software program that controls the engine fuel management system. The company offers off-highway tuning to increase horsepower for race trucks and on-highway tuning to provide performance and fuel-economy improvements for working trucks.

Before DSI tuning, Kikelhan’s racing rig had 520 horsepower; now it has 650 horsepower. The tuning process took place gradually as the truck began its racing career. “It was a good partnership because we could race the truck and give them feedback,” Kikelhan says. “You can’t do a bunch of changes to it in one week because then you don’t know what made the truck work better or what made it handle better.”

Robby Decker, owner of Race City Diesel, a Diesel Spec dealer and installer in Mooresville, North Carolina, helped tune the truck and drove it in some Bandit Series races. By the third race, the tuning was ideal, and this played a role in its success, Kikelhan says.

“It was in contention every race, and it never had a motor issue,” he says. “It ran every race in the season, which is tough to do.”

Johnson says race drivers who truck for a living or own fleets often use ECM tuning in both their race and work trucks.

This is the case for Kikelhan, whose company, Sundance Transport, hauls concert and entertainment equipment for the likes of Elton John, Dolly Parton, the NFL, iHeartRadio and Hollywood production firms.

He currently has Diesel Spec ECM tunes in two trucks – a 2004 Kenworth and a 2006 Kenworth, both with Caterpillar engines. Because his company’s loads are typically light, he says the tuning mainly provides fuel-economy improvements, which range from half a mile per gallon to a full mile per gallon. “Five mpg vs. 6 makes a big difference,” he says. “Basically it takes the restrictions off the motor. Everybody automatically thinks high-horsepower trucks don’t get fuel mileage. High-horsepower trucks do better with fuel mileage.”