New Champlain Bridge in Montreal, Canada is a special job!

Moving giant box girders into position for hoisting onto the New Champlain Bridge in Montreal, Canada is a special job. Heavy haul specialist Group Bellemare trucked in about 500 of them with their powerful tractor-trailers, and then used German-made Goldhofer hydraulic platform modular trailers, powered with 210- and 490-horsepower diesel powerpacks, to move them around the job sites.

The bridge, at 3.4 kilometre (2.1 miles) long, has 601 of these box girders. They weigh 50 to 80 metric tonnes (49-79 long tons) apiece, and are up to 35 metres (115 feet) long. The Goldhofers can turn on a dime, and were the perfect choice for manouvering individual box girders in the tight quarters of the laydown areas, and moving bolted-up sets of them, some over 90 metres (300 feet) long, into position for giant cranes to lift them onto the bridge pillars. 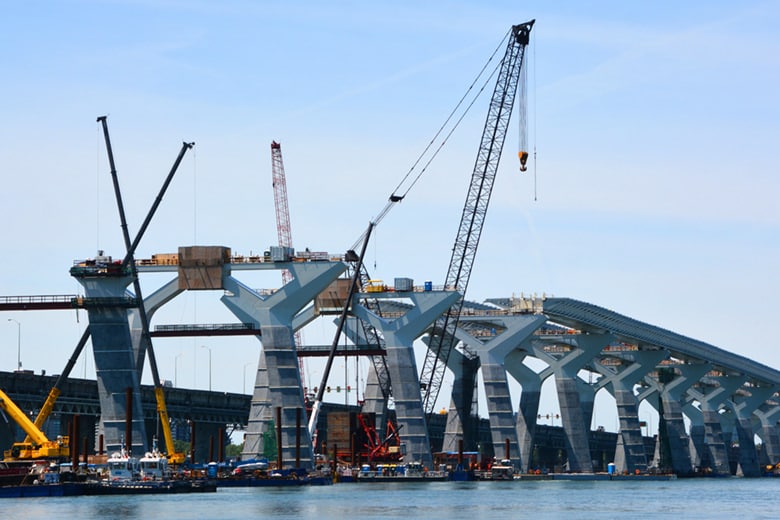 All wheels turn in concert

Each axle, and every one is a steer axle, has a 45 tonne (44-ton) carrying capacity. Each wheel can be turned 90 degrees to the right or left. This gives the trailers exceptional manouverability. As many lines as needed can be connected, to make, for example, an 8-, 10- or even 24-axle hydraulic platform modular trailer, as two or more lines are called when physically connected. The wheels all turn in concert like players in a Super Bowl marching band.

For positioning each long assembly of box girders, Bellemare would place several lines underneath; for example, one at either end and a third in the middle. A Bellemare operator would drive all three lines simultaneously, with their on-board computers connected wirelessly.

“If one trailer moves one inch, the others move one inch. They act as though they are physically connected. We use at least two, and as many as four [lines or] modular trailers; for example, two or four 6-axle lines, two 4-axle lines or two 8-axle [modular trailers],” says Kevin Kwateng, Heavy Haul Operations Manager, Bellemare.

On the maintenance side in this high-pressure construction environment, Kwateng adds, “We cannot have downtime. We have to have the means to fix or replace the equipment within 24 hours. This is one of the contingency plans for the project. There is nobody else in Quebec that has these Goldhofers.”